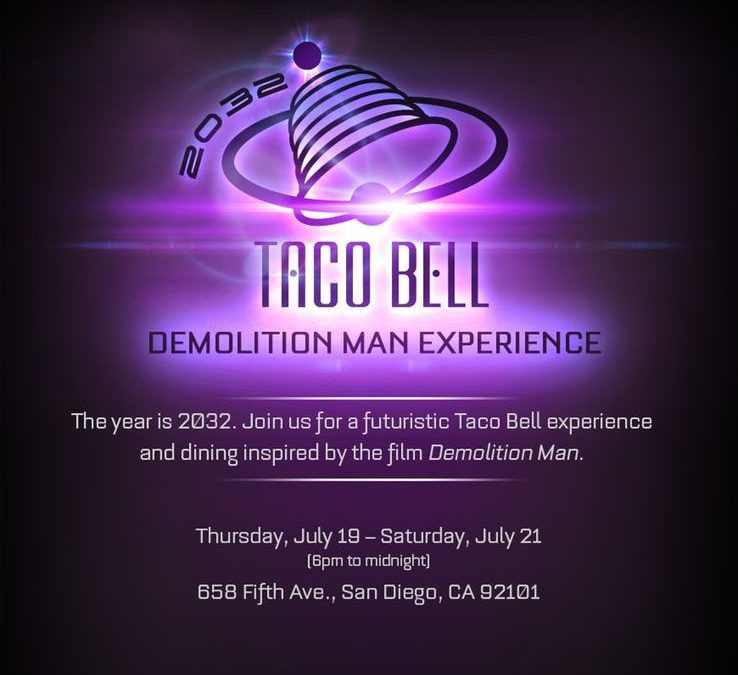 Want the full scoop on the Demolition Man Experience happening this weekend during comic con? Check out these news articles to get all the information you’ll need to survive the great Franchise Wars of 2018!

San Diego Union-Tribune:
Comic-Con 2018: Freebie Taco Bell to pop up in Gaslamp steakhouse
Taco Bell fans can take a free trip into the future this weekend when the “Demolition Man” experience pops up at Greystone Steakhouse & Seafood in the Gaslamp Quarter for Comic-Con weekend.

From Thursday through Saturday, the no-badge-required event will temporarily turn the upscale steakhouse into a futuristic version of… read more

Set decades into the future in the fictitious California metropolis of ‘San Angeles’, one of the film’s main plot points is the ‘Franchise Wars’, a series of dystopic battles between chain eateries… read more

SD Entertainer Magazine:
The Ultimate Comic-Con Takeover: “Taco Bell of The Future” Pop-Up
Taco Bell in The Gaslamp is launching a restaurant takeover at Greystone Steakhouse & Seafood, in honor of the Demolition Man movie’s 25th anniversary. Taking on a futuristic look with off-menu dishes from Taco Bell during Comic-Con, the space will be unrecognizable this weekend between July 19th – 22nd. Word on the street is… read more

San Diego Food Finds:
Taco Bell Demolition Man Experience
What do you get when you serve a taco on a silver platter? There’s a new dynamic duo crashing into Comic-Con this year! Taco Bell is teaming up with local fine dining spot Greystone Steakhouse & Seafood to fuel hungry convention-goers all weekend in honor of Demolition Man’s 25th anniversary.

While this 20-year landmark of the Gaslamp Quarter is typically known for its elegant atmosphere, exotic wild game and international selection of wagyu steaks, Greystone will be trading out their sommelier for a soda machine and their filets for Nacho Fries at this pop-up transformation into Taco Bell 2032, the “Taco Bell of the Future”. Inspired by the 25th Anniversary of Warner Bros.’ 1993 action sci-fi film Demolition Man, the restaurant takeover will… read more

JOIN US FOR HAPPY HOUR!